The AIR-T comes pre-loaded with a full software stack, AirStack. AirStack includes all the components necessary to utilize the AIR-T, such as an Ubuntu based operating system, AIR-T specific device drivers, and the FPGA firmware. The operating system is based off of NVIDIA JetPack SDK and is upgraded periodically. Please check for the latest software at www.deepwavedigital.com.

Applications for the AIR-T may be developed using almost any software language, but C/C++ and Python are the primary supported languages. Various Application Programming Interfaces (APIs) are supported by AirStack and a few of the most common APIs are described below.

A key feature of SoapySDR is its ability to translate to/from other popular SDR APIs, such as UHD. The SoapyUHD plugin is included with AirStack and enables developers to create applications using UHD or execute existing UHD-based applications on the AIR-T. This interface is described in the figure below.

The figure below illustrates supported Python APIs that can be used to develop signal processing applications on both the CPU and GPU of the AIR-T. In general, these have been selected because they have modest overhead compared to native code and are well suited to rapid prototyping. In addition, C++ interfaces are provided for many control and processing interfaces to the AIR-T for use in performance-critical applications.

Python Software Suite for DSP on the AIR-T


The table below outlines the common data processing APIs that are natively supported by AirStack, along with the supported GPP for each API. Some of these are included with AirStack, while some are available via the associated URL.

The AIR-T also supports GNU Radio, one of the most widely used open-source toolkits for signal processing and SDR. Included with AirStack, the toolkit provides modules for the instantiation of bidirectional data streams with the AIR-T’s transceiver (transmit and receive) and multiple DSP modules in a single framework. For a graphical interface to design SDR applications by connecting blocks together, GNU Radio Companion is available as shown in the figure below. GNU Radio is written in C++ and has Python bindings. 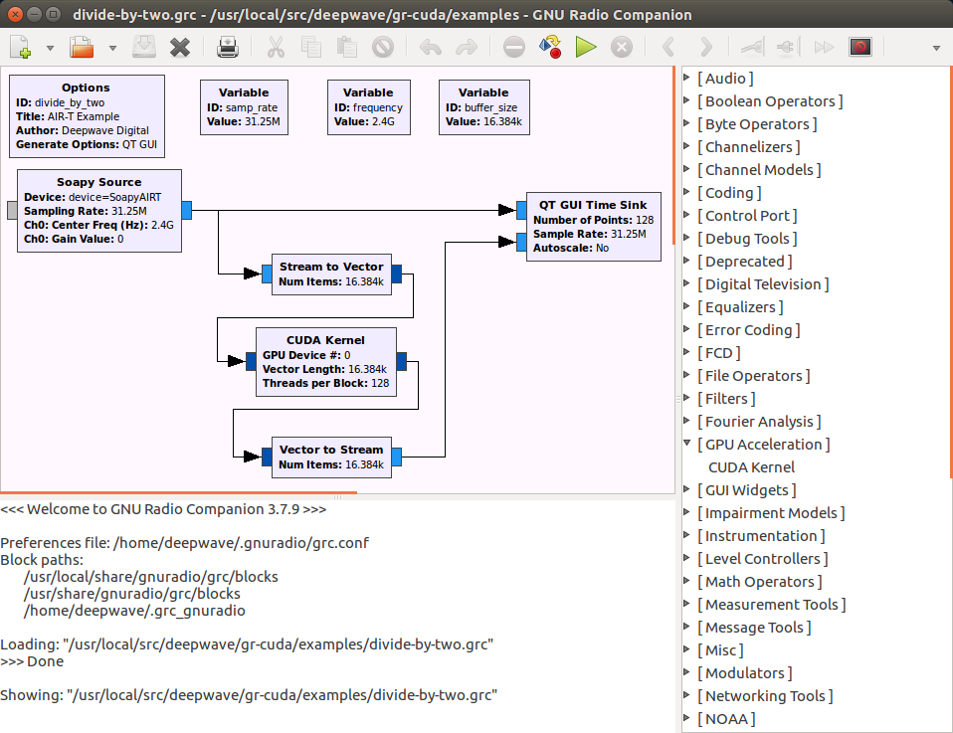 
Like the majority of SDR applications, most functions in GNU Radio rely on CPU processing. Since many DSP engineers are already familiar with GNU Radio, two free and open source modules have been created for AirStack to provide GPU acceleration on the AIR-T from within GNU Radio. Gr-Cuda and gr-wavelearner, along with the primary GNU Radio modules for sending and receiving samples to and from the AIR-T, are shown in the table below and included with AirStack.

The workflow for creating a deep learning application for the AIR-T consists of three phases: training, optimization, and deployment. These steps are illustrated in the figure below and covered in the proceeding sections.

AirPack is an add-on software package (not included with the AIR-T) that provides source code for the complete training-to-deployment workflow described in this section. More information about AirPack may be found here: https://deepwavedigital.com/software-products/airpack/.

The primary inference library used on the AIR-T is NVIDIA’s TensorRT. TensorRT allows for optimized interference to run on the AIR-T’s GPU. TensorRT is compatible with models trained using a wide variety of frameworks as shown below.

When training a neural network for execution on the AIR-T, make sure that the layers being used are supported by your version of TensorRT. To determine what version of TensorRT is installed on your AIR-T, open a terminal and run:

The supported layers for your version of TensorRT may be found in the TensorRT SDK Documentation under the TensorRT Support Matrix section.

Once a model is trained (and saved in the file formats listed in the table above), it must be optimized to run efficiently on the AIR-T. The primary function of the AIR-T is to be an edge-compute inference engine for the real-time execution of deep learning applications. This section discusses the supported framework(s) for optimizing a DNN for deployment on the AIR-T.

TensorRT - The primary method for executing a deep learning algorithm on the AIR-T’s GPU is to use NVIDIA’s TensorRT inference accelerator software. This software will convert a trained neural network into a series of GPU operations, known as an inference engine. The engine can then be saved and used for repeated inference operations.

The toolbox demonstrates how to create a simple neural network for Tensorflow and PyTorch on a host computer. Installation of these packages for training is made easy by the inclusion .yml file to create an Anaconda environment. For the inference execution, all python packages and dependencies are pre-installed on AIR-Ts running AirStack 0.3.0+.

In the above code, the example neural network model inputs an arbitrary length input buffer and has only one output node that calculates the average of the instantaneous power across each batch for the input buffer. While this network is not a typical neural network model, it is an excellent example of how customers may deploy their trained models on the AIR-T for inference.